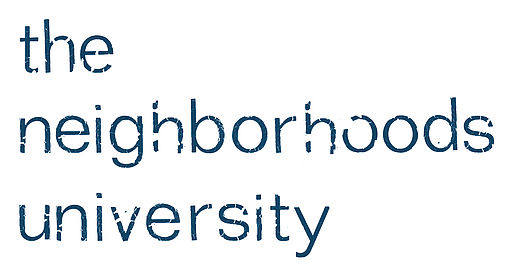 Over a period of five years the »Neighbourhoods University« (UdN) is taking an exploratory approach to develop and test contemporary forms of education at the intersection between culture, knowledge and urban development.

Launched in the Hamburg district of Wilhelmsburg in 2008 as an experimental setup by the Urban Design faculty of the HCU-Hamburg in cooperation with the IBA Hamburg, the project is putting questions from the fields of education, urban research and design into a perpetual practice.

Low-budget, in 1:1 scale and examined as a process of transformation of the existing architectural, social, cultural and economic fabric of the European city, a disused building is brought to life again through its programmatic use and relation to the neighborhood.

The final phase of the project merged its academic approaches with that of "hotel operations“. The »Hotel?« therefore is taken as a methodical question and a metaphor for the superposition of functions, acting as a vehicle to maximize the hybrid overlapping networks of students, scholars, neighbours, local activists, guests and municipal officials to open the UdN as a space for discussion of current, both site-specific and global issues of urban development and transformation processes.

In our presentation we will focus on our experiences within the Neighbourhoods University Project, experimental performative methods of a radically inverted understanding of participation and its potential to produce shared meanings, trust, respect and a common language generated by practice in Hamburg´s Wilhelmsburg, an island inhabited by people from 158 different nations.

Maja Momic studied architecture in Italy. In 2014 she finished her Master with a thesis on implementation of the lessons learned from the Neighbourhoods University into a scenario for future development of the site. She is currently working as a reasearch assistant on the Neighbourhoods University Project within the faculty of Urban Design at the HCU.

Ben Pohl is lecturer at the HCU Urban Design Master's Program. He studied design, photography and film in Berlin and worked since 2003 as a freelance cameraman. His research interests lie in the qualitative study of locally embedded economic actor networks. In 2012 he graduated from the Interdisciplinary Master's Program Urban Design, with a thesis on spatial and economic practices of gastronomic entrepreneurs on the Elbe islands.