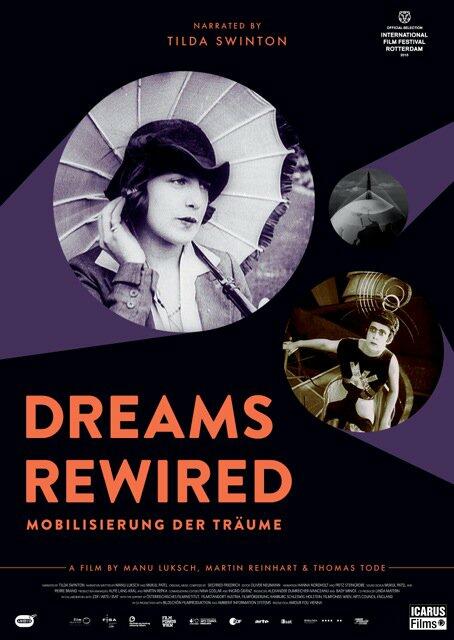 DREAMS REWIRED traces the desires and anxieties of today’s hyper-connected world back more than a hundred years, when telephone, film and television were new. As revolutionary then as contemporary social media is today, early electric media sparked a fervent utopianism in the public imagination – promising total communication, the annihilation of distance, an end to war. But then, too, there were fears over the erosion of privacy, security, morality. Using rare (and often unseen) archival material from nearly 200 films to articulate the present, DREAMS REWIRED reveals a history of hopes to share, and betrayals to avoid.

– but this one,  a time of always-on connectivity, ubiquitous computing, and the acceleration of everything, really is new. No longer even modern, we are allegedly post-modern, post-industrial, and hurtling towards the post-human. With its profusion of desire and superabundance of information, our age couldn’t be more different…

DREAMS REWIRED offers another perspective. A montage of films from the 1880s to the 1930s, many rare and previously unscreened, it traces contemporary appetites and anxieties back to the birth of the telephone, television and cinema. Its claim: that the social convulsions of today’s hyper-mediated world were already prefigured over 100 years ago, during the electric media boom of the late 19th century. Early electric media were as revolutionary as social media are now. They sparked a fervent utopianism in the public imagination; promising total communication, the annihilation of distance, an end to war. The technologies were to serve everyone, not just the elites. Through strengthening human relationships, increasing efficiency, and predicting the future, it would become possible to build a new world for all to share.

But what these media initially promised, and what they eventually delivered was very different. The early radical openness was disciplined and regulated, and two-way, peer-to-peer communication gave way to hierarchical broadcasting. And the fears that had accompanied the hopes – fears of the erosion of privacy, of ubiquitous surveillance, of financial exposure and moral hazard – began to appear well-founded.

DREAMS REWIRED is an assemblage of clips from nearly 200 films, ranging from the earliest dramatic works to music hall slapstick, newsreels, marketing materials, recordings of scientific experiments, and artistic adventures with film as medium. Through years of research in archives around the world, the directors have unearthed material that is by turns hilarious, revelatory, aesthetically striking, and astonishingly prescient. This footage is spliced together with a commentary on our contemporary predicament (voiced by Tilda Swinton) that, rather than plunging the audience into the past, pulls the historical material into the present. By forging an identification between contemporary viewers and their idealistic peers from 100 years ago, DREAMS REWIRED suggests a path of positive action towards a 21st century conception of openness.