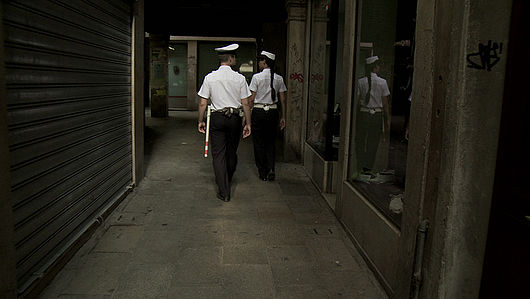 Impressions of the past in Venice and at other places Ruins embody the cycle in which humans and all they wrest from nature are eventual reclaimed by her. The remains of contemporary ruins span a curve from the usual ruin aesthetic which mediates thoughts lost in a long distant past to today's perspective that questions the origin of ruins and their current meaning. Are ruins the aesthetic symbol for decoding the state of the world, are they symbols of bloody and bloodless wars, even if they were removed long ago, like the ruins of the World Trade Centre?

A series of pieces deals with chance and observation of the every day; that which in our perception is hidden unless we slow down and take a closer look. These positions all deal with the mechanism of time; either as observation, as time passing, time as a human condition, the flow of a river, or are registers in digital media such as fixed camera sequences, surveillance cameras, or the speeding up of hand developed 8mm film. Different mechanisms and styles are juxtaposed, at times letting the scene play out as a parody of reality or a detonator of thought. Different rhetorical video stages are represented, as well as the Poetics of a Personal Narrative and irony. In these short formats and the juxtaposing methods of filming as well as observation and questioning, time and object are given the same value. A varied combination of esthetic choices come from the necessity of registering experience; coming in and out between abstraction, sound, words, text, analog images, and use of objects as well as irony, which in many cases, comment on the political.

The video program traces Neidich’s research into what he has called Neuroaesthetics and Neurobiopolitics. Neuroaesthetics deterritorializes neuroscience and argues against the scientific method as the only approach for understanding the sensorial world and its relation to brain processes preferring instead an artistic method he calls the Extro-Artistic Fiction.

On Mediality and Movement Screening of One-Channel-Videos focusing the “Transit“ of Images in Time-based art, tracks from contemplation to shift. With contributions by Paul Barsch, Alexander Basile, Diana Dodson, Naho Kawabe and Carolina Redondo. The Short Film A possible scenario by Cologne-based Artist Alexander Basile deals with the atmospheres of detachment that are typical for the very special “”no man’s land” an airport stands for; the film was shot on location at Cologne-Bonn-Airport, planned in brutalistic style by German Architect Paul Schneider-Esleben. Swiss Artist Diana Dodson’s Video Tour d’horizon joins in her moving image collage the clichés about the luxury of flying with beautiful sights of the sky.

Transit does not necessarily mean travelling from one place to another – it includes also the way how digital data move via the internet as in case of the state-of-the-art animation videos by Berlin-based Artist Paul Barsch or in the work Perfect Pitcher #1 - Song for the forbidden Zone by Japanese artist Naho Kawabe: In her mailable performance that made its conceptual way from Japan to her Hamburg studio and up to London, she is dedicated to a scene of STALKER (1979) by Andrej Tarkovskij, an example of a voyage in a highly spiritual and dangerous way.

In Landmark of Memory Chilean artist Carolina Redondo shows a game of deception, an oscillation between the plane and the spatial perception; her video is at the same time a adept reflection about the conditions of cinematic sense and movement, about expectations of the recipient and last but not least about the stun that art is capable to provide.

Elke Kania is a freelance author, curator and lecturer based in Cologne. The center of her scientific and curatorial approach is painting, time-based media as well as the conjunction of art- and film-scientific issues. Elke Kania worked as a curator at museum franz gertsch, Burgdorf (CH, 2004-2006), from 2009-2014 she has been a Research Associate at Institute for Art and Art Theory at the University of Cologne. Since 2008 she works at the Julia Stoschek Collection, Duesseldorf. kania@heimat.de

Ludwig Seyfarth is a freelance author and curator based in Berlin. He has regularly been producing articles for several magazines and exhibition catalogues since 1987. Seyfarth was a visiting professor from 2000-2001 at the HBK Braunschweig, at the HFBK Hamburg from 2002 – 2004 and at Kunstakademie Muenster from 2010-2012. 2006. In 2007 he received the ADKV-ART COLOGNE prize for art criticism. Since 2010 he works as a regular curator for KAI 10 | Arthena Foundation, Düsseldorf. seyf_art@gmx.de